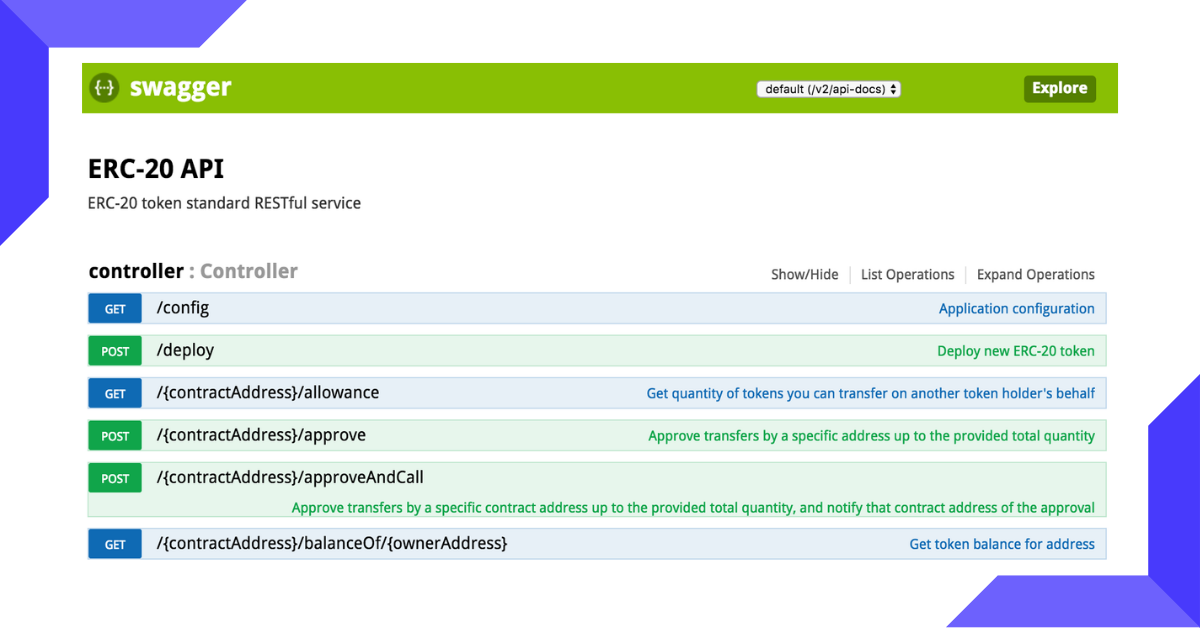 We recently made available our first blockchain solution on the Azure Marketplace.

This sample environment provides RESTful services for creating and managing ERC-20 tokens on top of Quorum.

It provides a 3-node Quorum environment and RESTful service endpoints for interacting with each of those nodes over HTTP. These services are provided via the erc20-rest-service which uses web3j and Spring Boot.

Create the machine image as per a usual Azure VM image, We recommend you use a DS1 v2 or better host, due to the memory requirements of running a Quorum cluster on a single VM.

You should use ubuntu as username, then deploy the host as per a normal Azure VM.

Once available on Azure, logon to the host, and start the application with the following commands:

This will start a 3-node Quorum cluster using RAFT consensus, and 3 instances of our ERC-20 RESTful service.

The ERC-20 token standard is an Ethereum standard for implementing smart contracts that provide tokens on the Ethereum network. It provides a common set of methods that these contracts should implement.

Each of these services are available at the following URLs:

At each URL there should be a Swagger UI that looks like the below.

You’re now ready to experiment with the service itself.

We’re going to start by creating our own token named QToken. From the Swagger UI select the POST /deploy operation (you can use the URL http://<hostname>:8080/swagger-ui.html#!/controller/deployUsingPOST alternatively).

Congratulations you’ve just deployed a smart contract to a Quorum network! It uses Quorum’s transaction privacy to ensure that the transaction is only visible between two parties on the three party network.

The address of the smart contract on the network is the response body:

In this case its:

Let’s now prove that the contract is only available to a subset of parties on the network.

We’re going to call the symbol method on the contract from each of our nodes.

We start with our first node:

You should see the symbol name Q$ in the response body showing that our first node can access the contract.

Now try doing the same on our second node:

This time around you’ll get a different response, as the second node was not privy to the transaction.

Finally we try with the third node which is successful, as this node was privy to the transaction.

Alternatively you can perform these actions without taking advantage of the transaction privacy of Quorum, leaving the privateFor field blank. Then the demo runs much like it would on a normal Ethereum network, but with Quorum’s fast RAFT consensus mechanism.

There are a number of other methods you can call as per the ERC20 token standard. We encourage you to have a play.

Please feel free to contact us if you have any questions or want to chat.

Web3 Labs recognized as a...
Connecting your Java...
The IW what? Introducing the...