Decentralisation at all Costs?

Proponents of Web3 like decentralisation. The concept of blockchain networks being unstoppable, where no individual, company or state can exert significant influence, resonates strongly with many of their users and proponents. The specific reasons for this can be varied — from the libertarians who believe in a future where central banks cannot inflate away the worth of their finances, to those corporate technologists who are fed up with brittle highly centralised systems that have been the bane of their lives for many years.

The degree of decentralisation itself is a spectrum, with many maximalists of bitcoin considering it the only true decentralised network, but many Ethereans too believe in the importance of true decentralisation. Where the Ethereum network continues to run, those applications are built on top of it regardless of mandates by government organisations trying to shut down specific applications or users on the network. In the same vein, as anyone can host a website on the internet, Ethereans believe it is important to have this ability to deploy whatever application or token users see fit.

This philosophy has been challenged these past few weeks with the U.S. Treasury Office of Foreign Assets Control (OFAC) sanctioning the Tornado Cash mixing service. I wrote about the fallout from this, with a number of Web3 companies, including Circle, Coinbase, Infura and Alchemy severing links with this service.
Other than Circle blacklisting USDC on wallets associated with Tornado Cash, the other actions by Web3 companies have affected centralised Web3 services, rather than the core Ethereum network itself. People can still access Tornado Cash should they choose by running their own Ethereum nodes, and accessing the smart contracts directly.
Whilst the OFAC may not like these actions, and it’s certainly a risky action to do if you’re in a jurisdiction where the U.S. Treasury can extend its reach, it stays true to the decentralisation ethos of the Ethereum network, as no one has executive control over the network in order to prevent such activities from taking place.
Ethereum’s upcoming merge has however challenged this true decentralisation narrative, with some interesting questions being postulated by the bitcoin and Web3 community. The reason is that a number of U.S.-based exchanges such as Coinbase and Kraken offer Ethereum staking services to Ether holders. Once Ethereum’s merge event takes place, transitioning the network to proof of stake, these exchanges will be running staking services on behalf of their customers. This involves running Ethereum nodes that validate the transactions on the network, which could become an area of contention.
The reason is that with the OFAC sanctioning of Tornado Cash, U.S. entities that process crypto transactions have a responsibility to ensure that they’re not being used to facilitate illicit transactions — i.e. related to Tornado Cash. Whilst Coinbase and Kraken are able to block their users from sending or receiving funds from Tornado Cash in their exchange, the concern is that they would have to censor transactions at the validator layer in order to run their staking services. 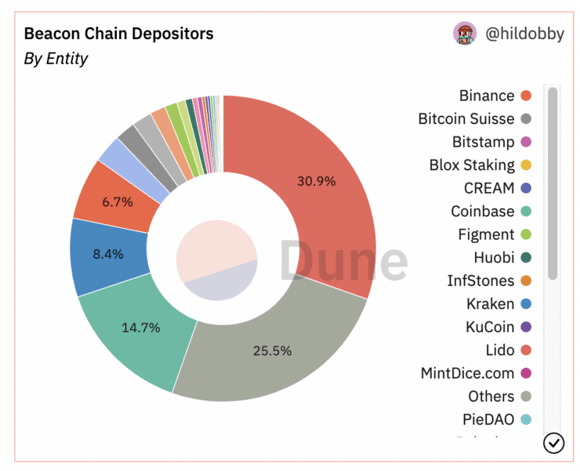 This would be bad for the decentralisation of Ethereum, as it would result in the U.S. Treasury having an overbearing influence on the Ethereum network. Filtering transactions at the protocol (staking) layer, if performed by a large enough number of network participants, would result in this OFAC-compliant subset of Ethereum representing the main network.
This is all simply speculation at present, but it has generated a lot of interesting discussion. Coinbase and Kraken are responsible for over 23% of the staked Ether currently, and it’s been suggested that 66% of the current Ethereum validators may have to comply with the regulations.

Brian Armstrong suggested he’d rather turn off their staking services than comply with OFAC at the protocol layer.

Whilst this has been a topic that has brought out many of the bitcoin community to extoll the virtues of their decentralised network which isn’t liable to such government interventions, I believe such comparisons aren’t appropriate.
It is because of the amount of innovation that has taken place on the Ethereum network that such a wide number of different services have emerged. Hence it’s likely that one of these would eventually catch the attention of the regulators. There are differences too, because Bitcoin will be remaining a proof of work network and continue to be criticised by the ESG community for this reason. Also, it’s not just Ethereum, but any proof of stake or similar blockchain network will be subject to exactly the same challenges by regulators.
Many other networks could in fact have such protocol restrictions enacted easily given a number are governed by a single entity, rather than as broad a community as Ethereum is.
The Bitcoin network simply doesn’t have any equivalent to a vibrant DeFi ecosystem that enables not just innovation to take place, but that also has been the subject of a number of heists, which when combined with mixer services and undertaken by groups in sanctioned countries, was bound to get the attention of the U.S. government.
These heists, which are a bitter pill to swallow, will ultimately strengthen and harden the Web3 ecosystems, to enable them to fulfil their full potential. It would set a bad precedent if restrictions at the protocol level were enforced. Whilst the Bitcoin community may feel immune to such restrictions, given almost 40% of the Bitcoin network’s mining takes place in the U.S. it’s not unfathomable to see it being affected by such actions.
It’s certain that over time, more regulation will apply to Web3. The actions of OFAC with Tornado Cash demonstrate one potential trajectory, but it is hoped such heavy-handedness does not extend all the way into the core protocols. As is the case with the existing web, you’ll never be able to eliminate all nefarious or illicit activity, however, there are places where restrictions can limit the actions of all but the most determined individuals. This is where the state and regulators should be paying the most attention.
Meanwhile, let’s ensure that the core plumbing underpinning all of this Web3 infrastructure remains decentralised and open, much like the existing plumbing of the internet and world wide web.
Have any questions or comments? We’d love to hear from you! If you want to find out more about blockchain, its growth, and newest developments, then check our blog or listen to our enlightening Web3 Innovators podcast.
Decentralisation
Previous Post