Why You Should Use Blockchain for Digital Fingerprints

Blockchain excels at proving an event took place. When new data is written to the blockchain, it is inextricably linked to every other record—changing even the smallest detail would change the structure of subsequent data written after it. In other words, blockchain is perfectly suited to tasks such as conflict resolution and guarantees of authenticity.

With more traditional mainstream technologies for data storage and capture, one of the biggest issues is that external parties cannot vouch for the accuracy of the data they’re being presented with. As it could have been tampered with in some way, this necessitates deeper audits and manual verifications against other records, equally subject to manipulation. There are simply no easy ways to resolve disputes revolving around whether or not something happened: each party, driven by their own interests, will have their own views.

As we’ve mentioned above, blockchain is tamper-proof—changing anything changes everything. As blockchain is also transparent, alterations to data become visible to everyone with access to it. Therefore, as soon as an event takes place, a digital fingerprint of that event can be recorded within the blockchain for future reference. With this security and transparency, it becomes a single source of truth for everyone involved, significantly cutting down on the time and costs involved with auditing, verification, and keepingmultiple records.

There are numerous real-world use cases involving digital fingerprints in which blockchain excels. One of them is digital rights management: blockchain can protect the copyright of digital content, as well as provide tracing tools in the case of violations. Additionally, the technology can also work as a system for recording any ownership changes and other relevant data, as we’ve covered in our article on Records of Ownership. 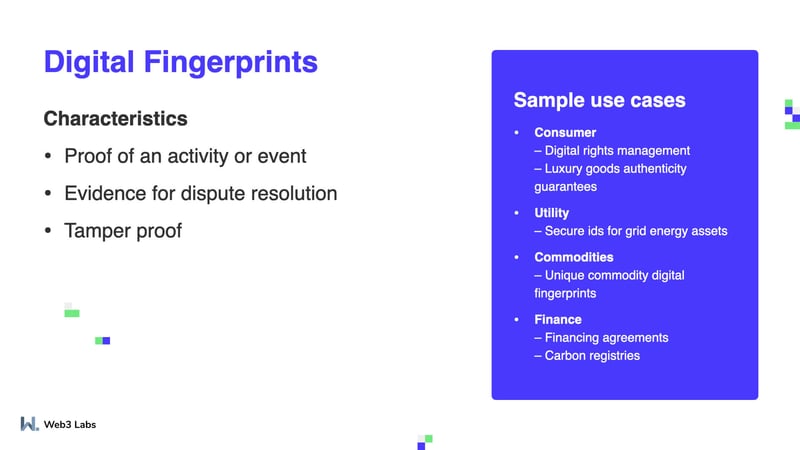 Japanese electronics giant Sony has announced that they were leveraging the technology to help manage copyright-related information. Users of any recorded content will be able to see the author’s information, as well as the time and date of the creation. They’ve also stated that educational content is a prime use case, as the area could benefit from increased transparency and efficiency.

Providing authenticity guarantees for luxury goods is another sphere brimming with potential. With the number of imitations and counterfeit goods, some of which can even pass for the real thing unless the buyer is very experienced, having irrefutable proof that the commodity was farmed, mined, or produced according to standards can be of significant help. Additionally, making such records generally available would go a long way towards cutting out counterfeits completely, as they cannot provide such authenticity records. 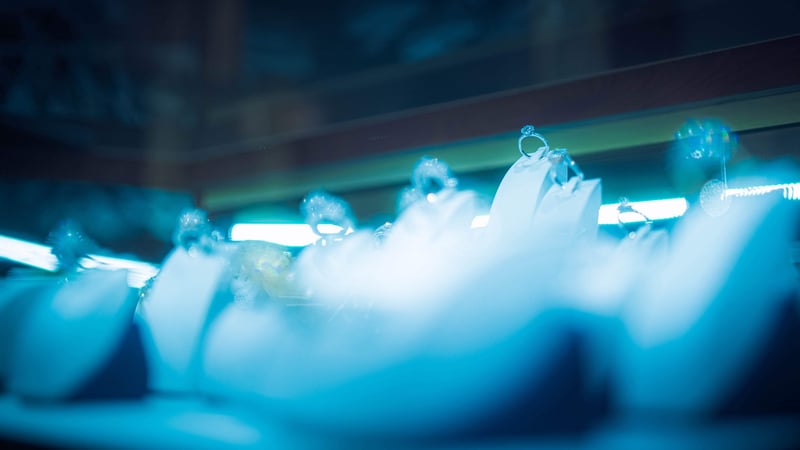 Diamonds are a commodity that can greatly benefit from improved supply chain transparency (another major blockchain use case that we’ve covered in Complex Business Processes), but also from proving they were ethically sourced. In this industry, transparency is quickly becoming a must instead of an optional feature. Everledger provides a platform for diamond tracking, which has been used by US-based retailer Fred Meyer Jewelers to show the journey of the pieces in the RockSolid collection that later became available in 100 stores in the United States.

In our Records of Ownership article, we mentioned emissions offsets, as they benefit from being able to track ownership from creator to buyer. They can also incorporate digital fingerprints by letting the company buying carbon emissions offsets have full traceability of where the offsets were first created, again providing a seal of authenticity to potential buyers.

FlexiDAO is a blockchain-based platform that lets energy retailers sell cleaner and cheaper electricity, providing them with certificates of origin, smart consumption based on market prices, and grid balancing services. This also lets customers track their green energy in real time, leading to vastly improved transparency in the field.

They’re far from the only participant in this field: professional services firm KPMG is working on a blockchain solution called Climate Accounting Infrastructure (CAI) that will let companies tackle their greenhouse gas emissions by measuring and reporting them, but also offsetting according to collected data. The solution will combine a blockchain platform provided by Allinfra, and a combination of artificial intelligence, machine learning, and Internet of Things (IoT) sensors provided by Prescriptive Data, a company supporting verifiable emissions data with their intelligent building software. 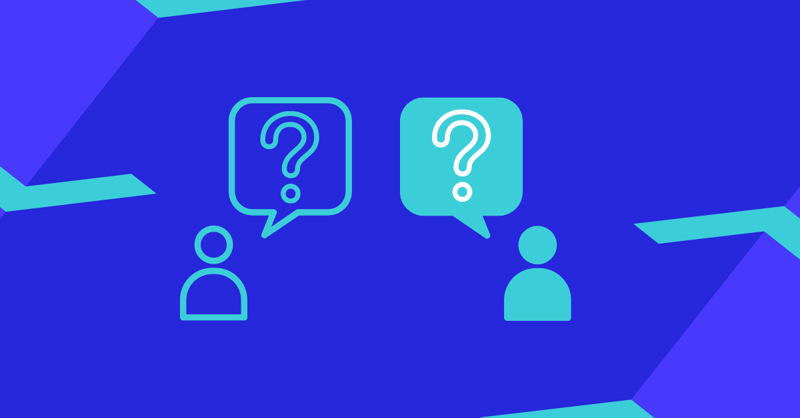 Even with the advantages we’ve listed, the idea of using blockchain can also bring some concerns to the minds of prospective users.

In short, using blockchain to store digital fingerprints of an event that took place provides a source of truth that cannot be tampered with. This can cut down on the time needed to audit and verify the data being presented, as well as the costs associated with this (especially if they usually require a third party).

As we've discussed here, the opportunity for blockchain as a source of truth for digital fingerprints is huge. We’d love to hear your thoughts on this—where do you see the technology being used most? If you’re interested in learning more about blockchain and how it solves common issues in different businesses, you can sign up for one of our upcoming Principles of Successful Blockchain Deployments Webinars. We cover a number of core use cases and support it with real world examples so you can see for yourself the benefits of the technology.

New video - 'Why blockchain is great for digital fingerprints'