One of the things blockchain is great at is in simplifying complex business processes. This may sound slightly counter-intuitive given the perceived barriers to entry for using this nascent technology, but keep reading and you’ll see why.

Many large companies deal with a multitude of suppliers and other businesses in their day to day operations. If they are of sufficient size, they may even deal with multiple other entities which are all part of the same company. These dealings supporting their core businesses creates a web of connections that require a lot of communications back and forth between these different entities or suppliers.  The complex, or cross-party process can be made significantly easier and faster through the use of an equally accessible, safe, transparent, and tamper-proof technology like blockchain. 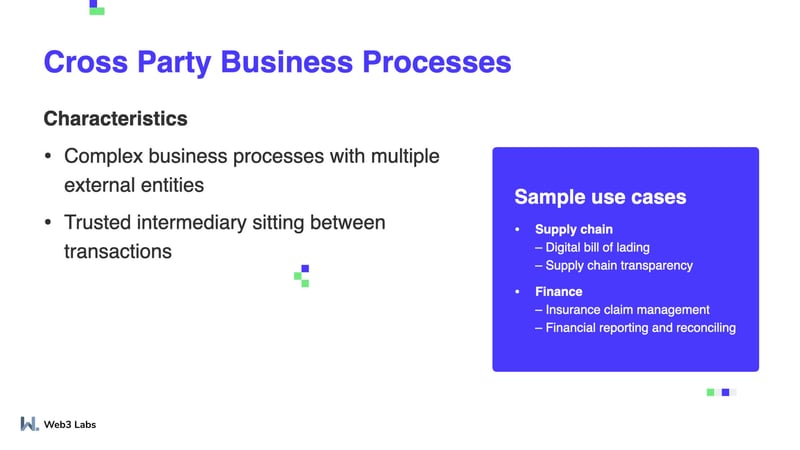 A common, but complex business process is a transfer of ownership via a sale: by default, this requires an intermediary to act as the trusted mediator between both sides - the buyer and seller  and handle the actual transfer of ownership of the asset and the processing of the funds to pay for the goods. Due to the intermediary sitting in the middle of the transaction, the transfer becomes more complex, as both the seller and the buyer of the asset being transferred need to update their own internal systems at each stage of the sale and subsequent transfer based on the interactions with the intermediary.  This may seem like the logical way of doing business—but blockchain removes the need for this additional complex and potentially costly process by providing a single, immutable source of truth for all parties. This can significantly simplify these processes, and save businesses a lot of money in the long run.

To provide a trivialised example - its like purchasing a house and no longer needing a solicitor to handle the transfer of funds and title deeds of the property! 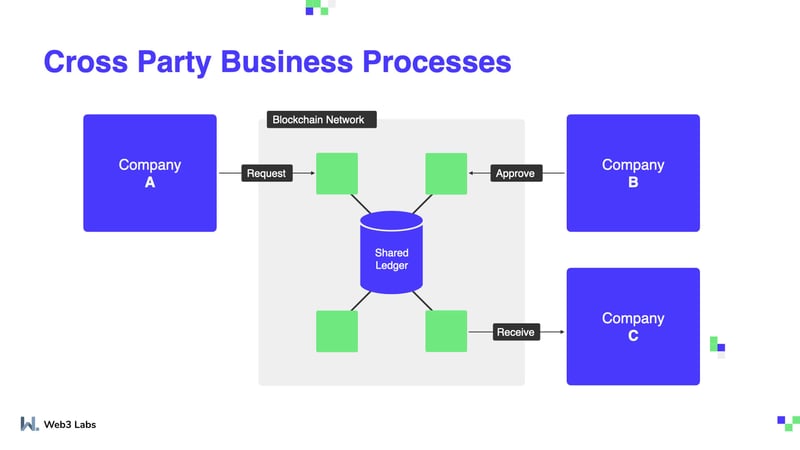 Using a shared ledger on a blockchain can reduce or even eliminate the reliance of intermediaries, which tend to be costly and time-consuming. However,  shared ledgers introduce a whole host of other concerns, mostly revolving around security and transparency. Blockchain is tamper-proof, which means that changing any recorded data corrupts the chain as a whole and renders it unusable—but even getting to that point would imply reversing complex cryptographic processes designed with the utmost security in mind. Blockchain is also fully transparent (within a private, permissioned network this only includes the participants), so it can be considered a neutral playing ground for everyone involved.

A specific field in which this implementation of blockchain has seen a lot of success is the supply chain industry. When shipping goods from one place to another, a number of different companies will be interested in at least a few stages of the journey. From a product’s on-loading to its arrival, each part of the process can be recorded on the blockchain, instead of having to coordinate between several participants and exchange information between one another.

One such  example is Komgo: a blockchain-based commodity trade network. The blockchain-based ledger allows Komgo stakeholders to digitally attach verifications of cargo shipments to specific letters of credits, which reduces the susceptibility of fraud while banks temporarily own a commodity shipment. In the year since its public launch, Komgo supports close to $1bn USD of financing which has been channeled by network members.

Insurance is another field in which blockchain can help streamline existing processes. With several participants, from the insurance company, to the underwriter, to the insurance buyer, everyone needs access to the same information. With a single source of truth for everyone reduces friction in the environment by simplifying data reconciliation and improving accuracy. Additionally, all of this leads to significant cost reductions in the long run. The Accenture Technology Vision 2019 survey shows that 80% of the surveyed insurance companies claimed they had either adopted or were planning on adopting blockchain technology.

Anthem is the second largest US healthcare insurance company. In December 2019, they announced a pilot blockchain project that would secure medical data of their 40 million members. Users will be able to scan a QR code through an app and grant access to their records to healthcare providers for a limited amount of time in order to still keep those records private, but also to withdraw that permission as soon as the appointment is over and protect their data. Anthem has added that they plan to use blockchain in around a dozen ways, around 40% of which are already live.

Wakam is an insurance provider, formerly known as La Parisienne, with a long and rich history—established in 1829, they insured France’s first horse-drawn carriages. Now, they’re using blockchain to reverse the usual model: instead of the client having to provide the proof of damage, now the insurer does this, along with automating the claims process.

Removing intermediaries, but also costly and time-consuming processes has already proven itself useful in the gaming industry—or at least one part of it: Xbox game publishers, who had to wait 45 days for their royalties before, are being paid out in mere minutes. Introducing blockchain now means that accounting does not have to rely on reconciliation caused by using different books and offline ledgers.The publishers are seeing other perks as well: now they can get customer demographics data almost instantaneously, allowing them to tailor their campaigns as needed.

In every conversation about blockchain and its advantages, some common arguments tend to crop up and need to be addressed:

The use cases we’ve mentioned are only some examples of places where blockchain is already leaving its mark. There are innumerable other areas with high potential for long-term growth. If you’re interested in learning more about how blockchain could help you, you can sign up for one of our upcoming Principles of Successful Blockchain Deployments Webinars. Here, you’ll learn more about each use case, but also how to ensure you succeed with the technology. Do you agree with our arguments presented here? Feel free to let us know!

Why You Should Use Blockchain for Digital Fingerprints